Successful online workshop on the future of EUCARIS

Successful online workshop on the future of EUCARIS

On 7 July EUCARIS organised an important online workshop on the challenges that lie ahead of EUCARIS in the coming years. Important matters like data-exchange with non-EUCARIS countries and improvement of the governance of the EUCARS network were presented. The workshop was concluded with an inspiring presentation by Mr Ian Grossman, Vice President, Member Services &Public Affairs at AAMVA (American Association of Motor Vehicle Administrators) on the challenges AAMVA faced and had overcome in their 80-years of existence. Fifteen EUCARIS (Third) Parties attended the workshop.

The future of EUCARIS will be further discussed in a follow-up workshop and at the General Assembly at the end of October (week 44).

If you want to have more information on the future of EUCARIS or you want to actively participate in this matter, please get in touch with the EUCARIS Secretariat via secretariat@eucaris.net.

First of all we hope that you and your families are keeping safe and well during these difficult times.
Additionally we would like to inform you of the changes that have been introduced in the EUCARIS program in response to the current crisis.

EUCARIS General Assembly
At the beginning of January the EUCARIS Secretariat sent a “save the date” for the EUCARIS General Assembly on 7-9 October in Helsinki (Finland). Additionally in February the EReg Secretariat sent the official invitation for the EReg General Meeting & Annual Conference for the last week of May in The Hague (the Netherlands). In this invitation also the announcement was made for an EUCARIS Future Meeting on 26 May.

Since the beginning of March 2020 many countries have introduced measures to restrict travel to mitigate the risks of COVID-19. A lot of international conferences that were scheduled in the period March – June 2020 have already been postponed. In addition, this week, the Prime Minister of the Netherlands announced that all such events are forbidden until the first of June.

Given the above unfortunately there was no other option for the EReg Advisory Board but to postpone the EReg General Meeting & Annual Conference until October 2020 and for the EUCARIS Secretariat to cancel the EUCARIS Future Meeting.

In order to minimize amount of travel that colleagues need to undertake it now has been decided to organize the EUCARIS General Assembly and the EReg General Meeting & Annual Conference in the same week and at the same venue. By doing so we can remove the need for colleagues who participate in both networks to have to travel to two separate countries within a month.

EUCARIS Technical Working Group (TWG)
The TWG will continue on 21 April via video. During this video meeting it will be discussed how the TWG summer meeting will be arranged.

Thank you for your help and understanding. We hope that you, your colleagues and your families will remain safe and well over the coming months and we hope to see each other soon!!

We are excited to announce that Finland joined the EUCARIS Treaty since 1 December 2019. We welcome Finland as a Treaty Party!

As from January 13th, 2020 EUCARIS Operations started monitoring the availability of the VAT service

This year the General Assembly looked back on the EUCARIS operation in 2018/2019 and looked ahead to 2020 and beyond.

An important development at the moment is the use of EUCARIS to fight European VAT fraud; starting January 1st 2020 all Tax Authorities in Europe will be connected to EUCARIS for the exchange of vehicle owner/holder information.

During the meeting there were various presentations from the European Commission, CITA, PCC SEE, Council of Bureaux and AAMVA.

At this meeting, Mr Servi Beckers (NL/RDW) was re-appointed as Chairman EUCARIS for another year.

Under the chairmanship of Mr Servi Beckers there was unanimous agreement for the EUCARIS developments in 2020. The most important development in 2020 will be the implementation of EUCARIS for the corss-border enforcement of toll violations.

For the years after 2020 the focus is on the exchange with countries outside the European Union and the use of EUCARIS for the international exchange of vehicle insurance data.

Over 80 colleagues from 29 European registration authorities met on October 3rd and 4th in Bunratty, Ireland, during Hurricane Lorenzo for the annual EUCARIS General Assembly. 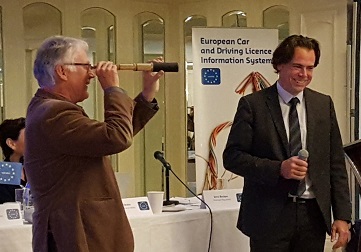