This author has not yet filled in any details.
So far dijkstra has created 4 blog entries.

The Portuguese organisation IRN (Instituto dos Registos e Notariado) was host of an EUCARIS Technical Workshop in order to start exchanging data under the Prüm and CBE directives. The IRN will be the National Contact Point for EUCARIS regarding these exchanges, and it is expected that Portugal will start exchanging data before the end of 2016. 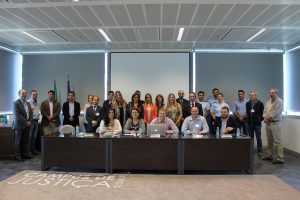 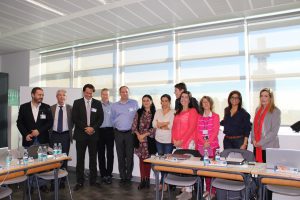 The Salzburg Forum is a platform for multilateral dialogue and cooperation on issues of internal security. Its Member States are Austria, Bulgaria, Croatia, the Czech Republic, Hungary, Poland, Romania, Slovakia and Slovenia. One of the topics of the forum is regional cooperation in the area of road safety.

This means that EUCARIS has been asked to develop a software application – “EUCARIS Salzburg service”- for the technical implementation for the agreement on Facilitating Cross-border Enforcement of the Road Safety Related Traffic Offences signed on 11 October 2012 in Mátraháza, Hungary.

On 10 October 2014 Hans van der Bruggen was appointed a Knight of the Order of Oranje Nassau in Oslo by Dutch Ambassador Ms Bea ten Tusscher. Van der Bruggen was awarded the honour for his work in a European context. He was invested with the honour as he bade farewell as Acting Chairman of the EUCARIS Participants’ Board.

Belgian honour
In 2011, King Albert II of Belgium bestowed another royal award on Van der Bruggen for his distinguished service to European cooperation when he was appointed an Officer in the Order of Leopold II at the Dutch embassy in Brussels.

Chairman of EReg
Until June 2014, Van der Bruggen was also the Chairman of EReg, the Association of European Vehicle and Driver Registration Authorities. Van der Bruggen was also the initiator of this European collaborative partnership. He brought together the registration authorities in Europe to stimulate more intensive European cooperation and knowledge exchange.

EReg even grew into an international non-profit organisation, or rather an Association Internationales Sans But Lucratif (AISBL), under Belgian legislation. The organisation identifies, follows and influences European developments and regulations, exchanges best practices and works jointly on topical subjects. In 2014, the 26 EReg countries appointed Van der Bruggen their Honorary Chairman at the EReg General Meeting & Annual Conference 2014.

Award
On 20 October 2008, on behalf of EUCARIS Van der Bruggen was presented with the “iGovernment 2.0 Award”; the award for the best European project in the field of data exchange in the European digital government. The jury praised EUCARIS as being the most innovative, practical, applicable and transferrable data exchange system.